We all have our favourite rooms where we can sit and relax . My sister Geraldine’s bolthole, where she can escape the humdrum chores of everyday life, is her summer house. Set in an oasis of a garden, with lovingly tended vegetable patches, fruit trees, a birch grove, a herb garden and even a labyrinth, this is where she and her husband Alan, the Potter, spend a great part of their summer days. This painting is as much a portrait of the summer house as it is of Geraldine. Here are all the bits and pieces which formerly adorned the main home but, having served their purpose, are loved too much to be thrown out and end up forming an eclectic collection of their family’s history.  Painted before lockdown started here in March this year it nevertheless shows how she spent those never-ending months of isolation. 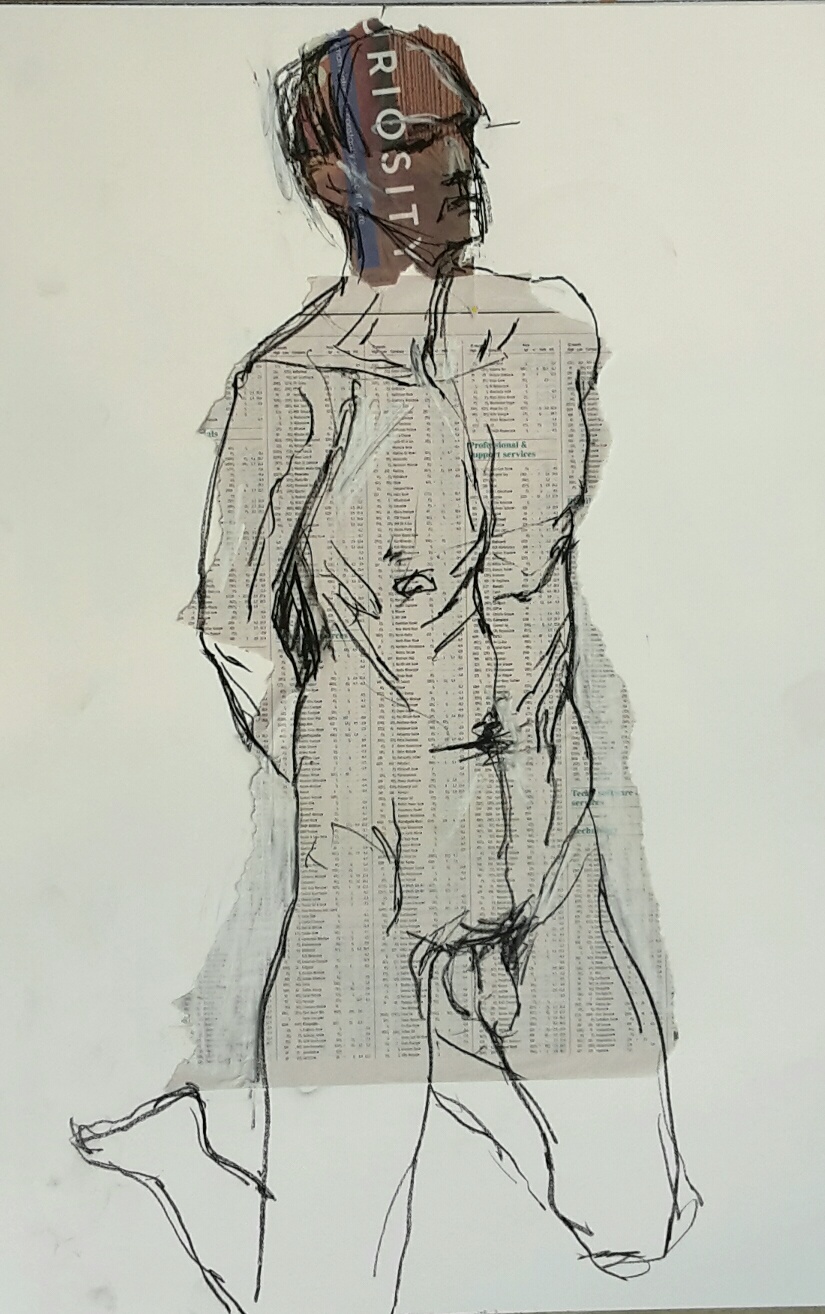 Conté crayon and collage on A2 cartridge paper 20  mins

I loved this pose would be a good study for a San Sebastian painting!

Oil pastels and collage on A2 cartridge paper 30 mins 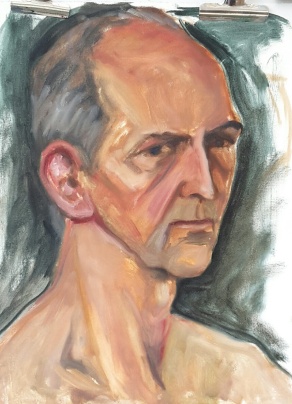 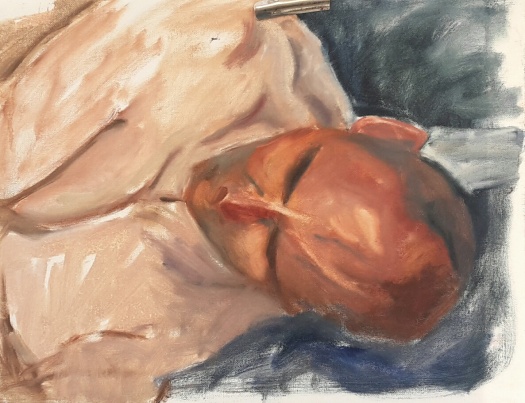 It’s been nearly 3 months since my last foray into the life room and it was so good to shake off the temptation to sink into winter hibernation on this miserable grey January Saturday. Below are a few sketches from the 4 hour session….. 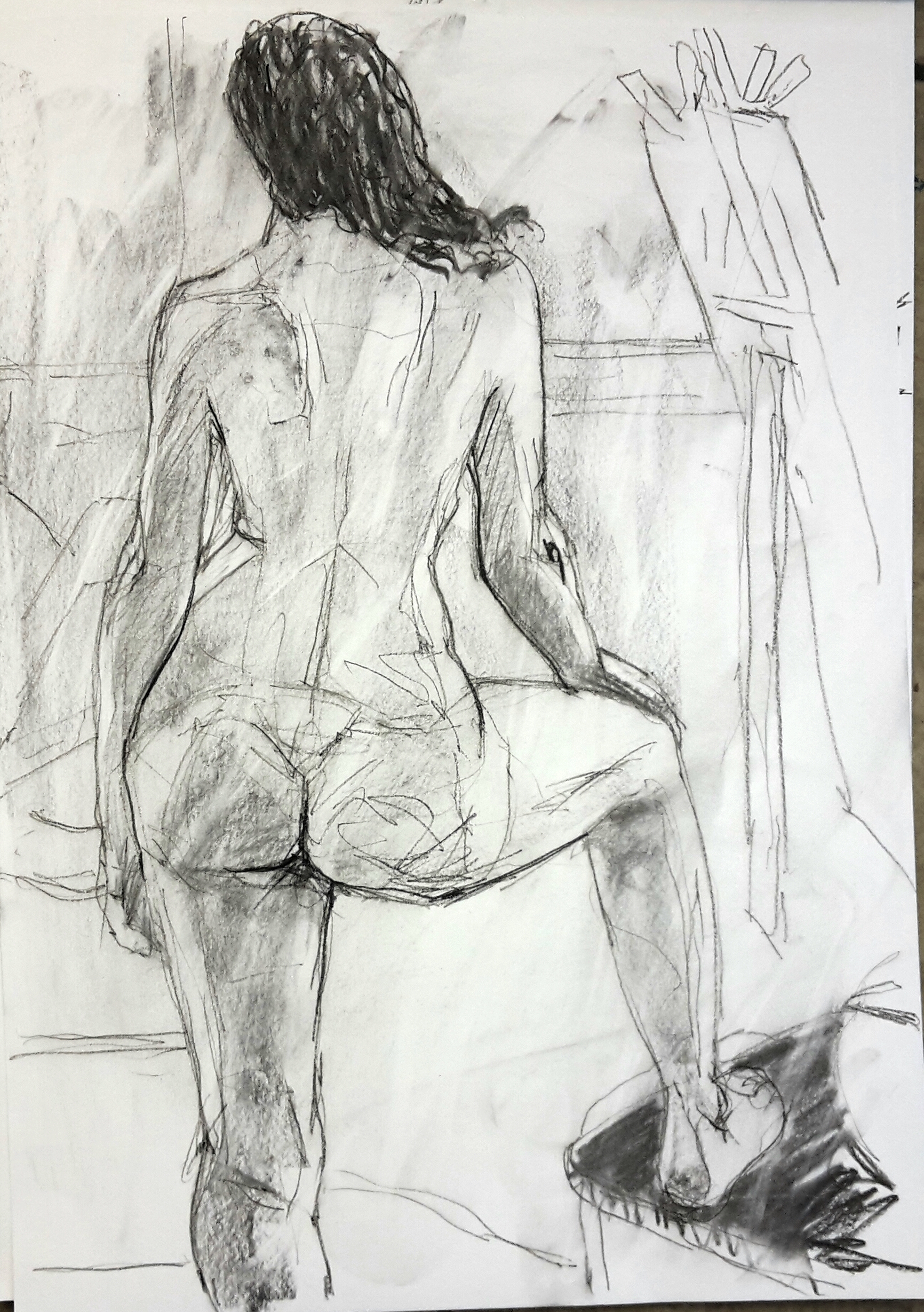 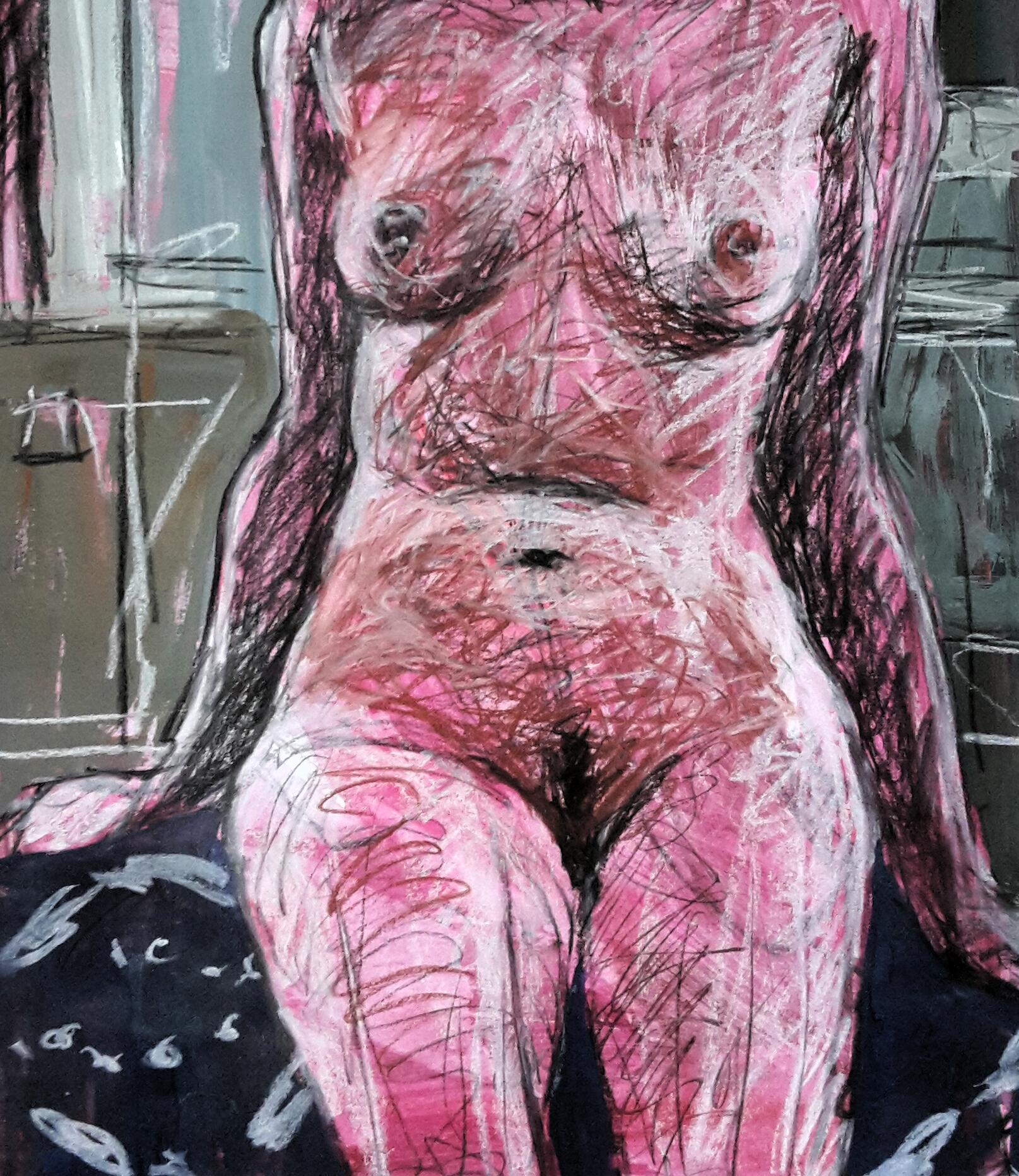 Mixed media in A3 sketch book

As a follow up to Saturday’s portrait workshop, I decided to start a new painting. So last night I covered an old portrait that wasn’t working with burnt umber and this morning started taking away the paint with a brush and later a cloth dipped in thinners.

The result is a rather spooky image!

It won’t stay like this for long I need to let this dry and start working into it. Perhaps I’ll post further stages in the development (and perhaps not….) 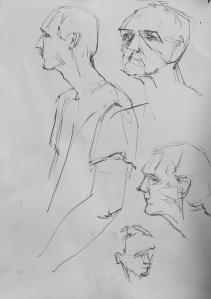 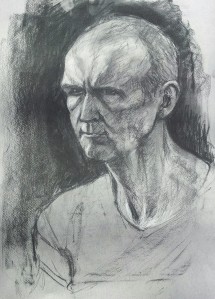 I was tutoring this portrait session but was able to do a bit of sketching in between -stops me peering over people’s shoulders too much and making them nervous! 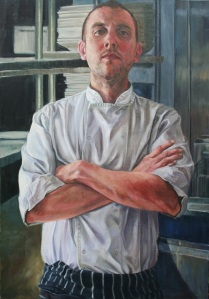 Ooh look what Skye, my portrait model for last night’s portrait class, brought! I feel a portrait AND a still life coming on!

In December 2011 I had three small super 8 films transferred to DVD. I wasn’t sure what I was going to find on them but I did know they were taken by my parents in the 60s. Actually I had hoped I would find a reel with my sister’s wedding filmed in 1969 as I had a funny (guilty!) feeling that it was  rather foolishly put in my care. What did emerge, however, was, firstly, a trip my folks made to Canada to visit an aunt who had emigrated to Winnipeg many years before from dad’s “aul country” of Armagh Brague. The next contained some odd bits and pieces obviously filmed to record every day life in the McClelland household the quality of which had so badly degraded it was frustrating and almost painful to watch through the snowstorm and weird colours which had replaced the old familiar faces of yore. The third was filmed at my sister’s graduation in 1964 outside Queen’s Whitla Hall in Belfast.

There she was – my sister – a young, newly qualified teacher, fashionable in her navy chiffon shift dress with her hair piled high in a black bouffant – stunning (as she still is) walking towards the camera and beside her Mary, my mum, dressed to the nines in the outfit she had worn to my brother’s wedding the year before! She was always stylish.

Inspired by the Gerhard Richter exhibition I had visited in Tate Modern shortly before I had had the films transferred, I decided to paint my mother  from the archive and this is the result:       (with apologies to Gerhard Richter!)

“Mary in her Finery” oil on canvas

This study was started a couple of days ago in a pastel demonstration at a local art club, The Monday Painters, where someone was taking photos as I worked. (Of course if I’d known this I would have glammed myself up a bit!)

The subject is a young nephew who came to sit for me last week. I loved the pose which reminded me of a Modigliani subject.

It seemed the perfect opportunity to combine the pastel demonstration with a study for the oil painting which I have now started. 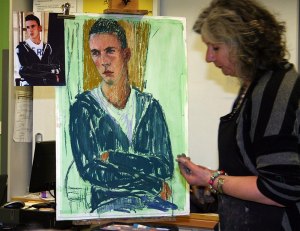 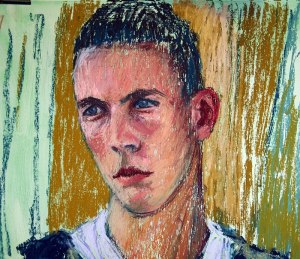 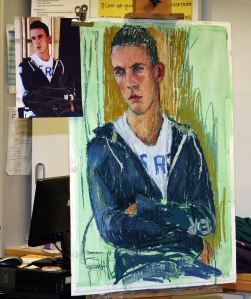 Thanks to Les Sharpe from Monday Painters for the photos

Below are a few images of work in progress during today’s portrait workshop in Belmont Tower, Belfast with the lovely Ceardha as model.

Shirley Barlow working in acrylics on board

Roberta Lindsay working in soft pastels on pastel board 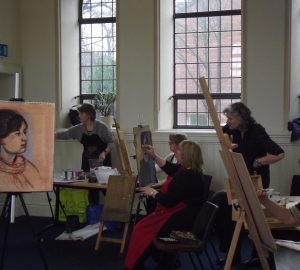 I love this pose – Ceardha looks like she could have stepped straight out of one of Manet’s paintings! 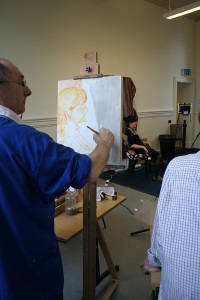 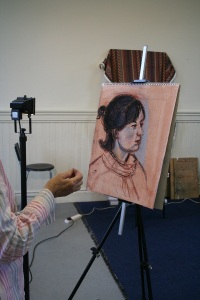 Sometimes as a tutor there’s a danger to hover over peoples’ shoulders making them nervous so during the longer pose I took the time to sit down and draw. The only space left to sit was right at the end which luckily enabled me to draw her profile

Interestingly early portraits by the Renaissance artists were always profiles 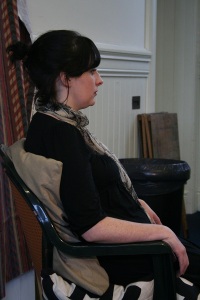 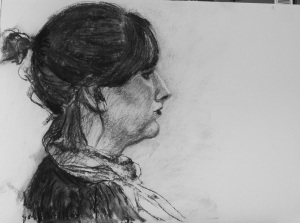 I took a few photos of the process and am sharing them here.

The first sitting is always scary –  exchanging a few awkward niceties with someone you have never met before and then starting to sketch them.

As if it isn’t bad enough sketching in front of people let alone someone who doesn’t know you!

At this stage it’s sometimes more about interacting with your subject and  the drawing is an analytical study more than creating a “likeness”. (just as well!)

At the end of the sitting, a couple of nervous sketches and a batch of photos later I get to work on the next stage – tonal sketches and layouts for the final composition.

This is a head and shoulders commission so I worked to the same dimensions as the canvas itself. 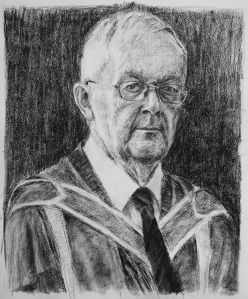 Looking at this now after several weeks more of studying the subject, I can’t believe how unobserved it was.

Below is a reworked study – much more satisfying! 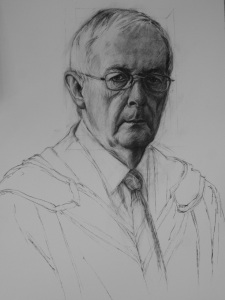 However next stage is transferring the image to the canvas. I prefer to work on stretched linen for these portraits and I often start with a terre verte underpainting.

This is when I request a second sitting and, using raw umber and white , I start a tonal painting.

Time for dabbing on some colour. Now the terre verte underpainting comes into play. The skin tones resonate immediately with the green contrast:-

The subject was to be painted in his academic gown and hood and I felt these would work best with a dark background:-

In the course of painting – studying the planes, lines and characteristics of the face I tend sometimes to over emphasise them creating an image which looks older than the subject really is so this is the point where another sitting is necessary to reduce this effect and check skin tones, hair and costume colours  – also realised I had major corrections to do around the mouth area :-

Final stage – waiting for approval from the person who commissioned the painting – another scary moment but thankfully they liked it! 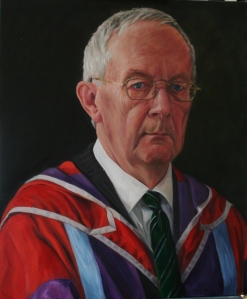 A little slideshow of paintings from the “Still Waters” Exhibition

Last Saturday saw the launch of my exhibition “Still Waters” at the Gallery in WWT Castle Espie, Comber, Co Down. Castle Espie itself is beautifully  situated in the rolling hills of Co Down beside Strangford Lough.

The Gallery is in the original house and is a wonderful space for an exhibition. 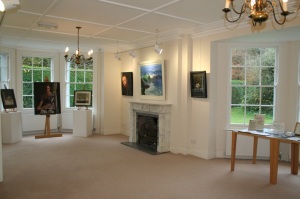 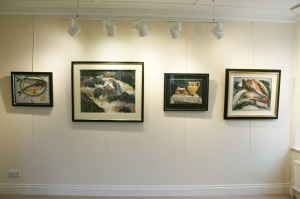 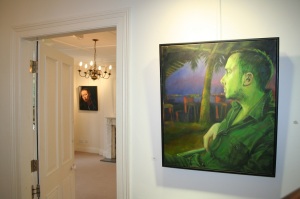