In December 2011 I had three small super 8 films transferred to DVD. I wasn’t sure what I was going to find on them but I did know they were taken by my parents in the 60s. Actually I had hoped I would find a reel with my sister’s wedding filmed in 1969 as I had a funny (guilty!) feeling that it was  rather foolishly put in my care. What did emerge, however, was, firstly, a trip my folks made to Canada to visit an aunt who had emigrated to Winnipeg many years before from dad’s “aul country” of Armagh Brague. The next contained some odd bits and pieces obviously filmed to record every day life in the McClelland household the quality of which had so badly degraded it was frustrating and almost painful to watch through the snowstorm and weird colours which had replaced the old familiar faces of yore. The third was filmed at my sister’s graduation in 1964 outside Queen’s Whitla Hall in Belfast.

There she was – my sister – a young, newly qualified teacher, fashionable in her navy chiffon shift dress with her hair piled high in a black bouffant – stunning (as she still is) walking towards the camera and beside her Mary, my mum, dressed to the nines in the outfit she had worn to my brother’s wedding the year before! She was always stylish.

Inspired by the Gerhard Richter exhibition I had visited in Tate Modern shortly before I had had the films transferred, I decided to paint my mother  from the archive and this is the result:       (with apologies to Gerhard Richter!) 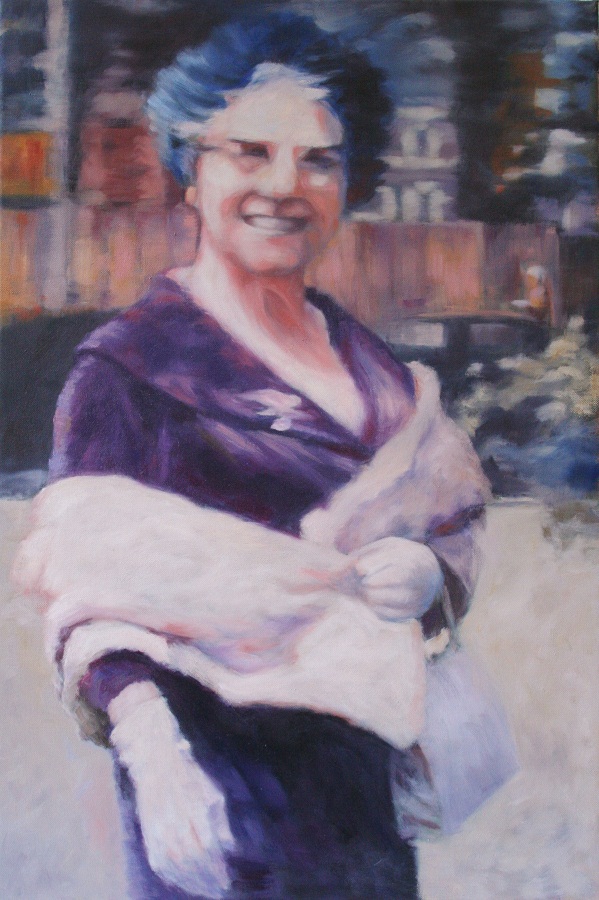 “Mary in her Finery” oil on canvas

Rosie is an honours graduate of Manchester Polytechnic, Faculty of Art and Design and studied Fashion Illustration at St Martin's School of Art, London. Rosie has been exhibiting and selling her art for the last 30 years all over the world. View all posts by Rosie McClelland Art

3 thoughts on “Memories of Mary in all her Finery”