Last weekend I visited Mr and Mrs P in Berlin. They have recently moved there (see my blog archive – https://rosiemcclelland.wordpress.com/2011/06/30/the-muse-has-gone/ ) In addition to catching up with them I was excited to see Berlin – a city I had never visited in spite of having lived for 18 years in Germany. Admittedly for almost half of that time Berlin lay behind the iron curtain but I still remember the excitement in 1989 when the wall came down and many “Frankfurters” actually drove up to witness it.

Mrs P had an itinerary for the weekend and naturally she wanted to show me the side of Berlin which had attracted both of them enough to want to move there. Even in the 80s, Frankfurt, where I had lived, had “Alternative” areas but East Berlin was “Alternative” 100 fold. Nowadays it’s known as “Urban Art”! 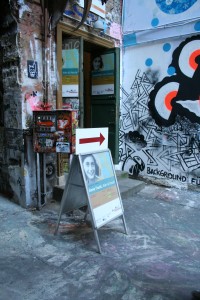 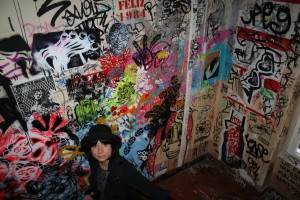 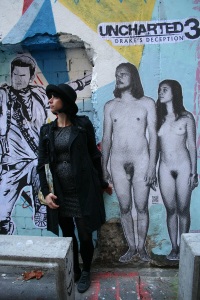 Sunday started with  a mystery destination – all I was told was that it started at 11am, was hands on and something I really enjoyed doing …and it was!

We travelled to the Berlinische Galerie where it was possible to purchase entry into the exhibits and take part in a 2-hour life-drawing session. Materials were provided – a reem of A3 copy paper, drawing boards, clips, pieces of charcoal and graphite and a stool to sit on – what else does one need – oh yes – a model. Six poses later and around 30 happy artists were able to validate their drawings with a Berlinische Galerie Stamp!

One of the things I really wanted to do was visit the Gesichter der Renaissance exhibition at the Bode Museum. Masterpieces of  Italian portraiture from the 15th century. On Monday morning we set off early and queued for an hour before purchasing tickets for entry around 3 hours later. The wait, however, was so worth it – a vast exhibition of paintings, sculptures and reliefs from 50 different museums including the Uffizi in Florence, Louvre in Paris and the National Gallery in London with special guest Da Vinci’s Lady with an Ermine – magnificent! 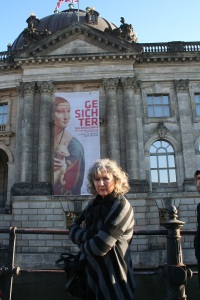 A long sunny but cold wait for tickets

With time to spare for sight-seeing we headed off towards Unter den Linden – a beautiful boulevard packed full of centuries of history.  The Humboldt University was the site of the notorious book-burning event by national socialist students in May 1933

I remember at the time the film Schindler’s List was released, whole classes of German schoolchildren were packed off to cinemas to watch it- Mrs P’s class included – so I have always maintained that the Germans make much more of an effort to remember their history, good and bad, than we do here. It was an encouraging sight to see that opposite this memorial is a permanent row of stands selling books 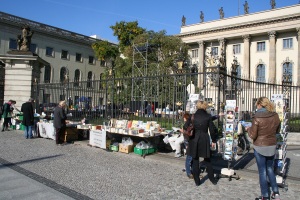 Kathe Kollwitz sculpture for the victims of war

Probably the most poignant experience was walking through the holocaust memorial. Designed by Peter Eisenman it is a series of 2711 grey stone slabs of varying heights from ground level to far above the head evoking a sense of disorientation and introspection.

But lets end on a brighter note. One of the things I really miss from Germany is the cafe culture and I think I managed to make up for lost time…..

I can thoroughly recommend Berlin as a weekend city break – so much to see – I’ll be back!

Rosie is an honours graduate of Manchester Polytechnic, Faculty of Art and Design and studied Fashion Illustration at St Martin's School of Art, London. Rosie has been exhibiting and selling her art for the last 30 years all over the world. View all posts by Rosie McClelland Art